HOW I BECAME AN INSTRUMENT MAKER

I am often asked how I got started in instrument making, my stock rejoinder is "how long have you got?" So I thought it might save a significant percentage of my life if I explained it in these pages.

My career started, in 1965, with a 5 year apprenticeship with the Shell Oil Company in their Shell Haven refinery in Essex as a fitter and turner. A fitter in those days was not someone who strangled motor car exhaust pipes but one who made things of metal, by hand, to very tight tolerances. A turner was, as might seem obvious, one who made round things smaller all day, but again, in metal and to very tight tolerances.

After my apprenticeship I continued to work for Shell for a short time, went to Holland where I worked in a steel foundry and subsequently in a Rotterdam shipyard and returned to England, after two years, to pursue a career in engineering management. Having secured registration with the Engineering Council as "Incorporated Mechanical Engineer" and the position of Chief Engineer with a chemical processing company, I started to get itchy fingers, yearning for the hands-on aspect of engineering again.

The answer to those itchy fingers was to start my own engineering business where I could be both Manager and Craftsman at the same time. With much help, support and encouragement from my wife, Cathie, the business started in 1982 and ran for 15 years during which time we made a variety of things including high tech breeder homes for wasps, a 26 tonne storage tank for custard and the machines which press hops into tablets for the cask conditioning of every barrel of real ale brewed in England, and a good number of other countries too. The latter sources of world-wide enjoyment still run today, giving me a warm feeling of having done something really worthwhile with my hard earned skills.

In the early 90's things began to look pretty bleak for small engineering firms (ours being amongst the smallest), we never knew which of the dozens of outfits who owed us money would go broke before paying up and, most likely, take us with them. We expected daily to have a big debt go sour on us precipitating bankruptcy, opening the post in the morning was a nerve wracking affair. Our Accountant began referring to engineering as a high risk business and advising us to find some other outlet for our talents.

At about this time, looking for some distraction at the weekends, Cathie, our son Doug, and I, joined Prince Rupert's regiment of foot of the Sealed Knot Society, often referred to as the Barmy Army. We spent many happy hours fighting the Roundheads in re-enactments of English Civil War battles and made loads of good friends during evenings in the giant beer tents which are an integral part of those events. One such friend was the Master Drummer of the Royalist Army, one Roger Davenport, Roger knew that we ran an engineering workshop and enquired as to our ability to make a Bb fife, an item much in demand by the drummers of the Sealed Knot Society but in short supply. I immediately said that if I could not make a hollow stick with seven holes in the side then my life so far had been wasted and asked how many, in thousands, he wanted. Roger only wanted two! Never mind a challenge is always worth pursuing and, taking an old fife as a pattern, returned to the workshop to make a start on Monday morning. That's when I discovered that a "hollow stick with seven holes in the side" is a far cry from a musical instrument.

The first two fifes were acceptable and quickly snapped up at the price of £20:00 , those were the days. There were however questions about the musical quality of those first instruments which ,while acceptable, were far from outstanding. I resolved to learn more about music in general and woodwind instruments in particular, quite a task in those days when the internet was not as full of help as it is these days and I had less idea of how to drive a computer than I had about making woodwinds.

Numerous people looked with interest at my work and offered useful comments like ah, hmm, and "keep up the good work ". I was on the edge of giving up when I ran into a Morris dancing friend, Dave Van Doorn, who I knew had made bagpipes. I immediately ran to get the instruments I had made so far and halfway up the staircase of a pub in the village of Battle, being jostled by crowds of drunken revellers after the annual bonfire parade, I received my first lesson - you have to start somewhere! As I recall, Dave was dressed as a Green Man and I was doing a fair impression of a bonfire (unlit), so circumstances were not ideal but I learned more in those confused minutes than in the preceding six months. The most important (as it turned out) piece of information Dave imparted that evening was the name of one David Armitage, Head of the Woodwind Instrument Workshop at the London Guildhall University whom I contacted without delay. I was put in touch with Matthew Dart, Bassoon maker, who ran the evening class at the University. Matthew told me there were no places available on his course but that I could take an example of my work to his stand at the London Early Music Show and he would give what advice he could. This turned out to be just a ruse to see if I was sufficiently dedicated not to waste Matthew's time, after all, my experience and knowledge gained so far did not make a very convincing case for entry. So, after dragging Cathie and Doug up to London to the Early Music Show and then dragging them around all the stands, with me becoming more and more enthusiastic and them less and less, I eventually got to talk to Matthew. He looked at my work and announced that a place had suddenly become available and from then on things started to come together at last.

I attended Matthew's class for another three years, getting lots of extra curricular hints and tips from David Armitage, Matthew and the other students, most of whom had musical backgrounds. I picked everyone's brains unmercifully both in the lessons and down the pub afterwards and generally made a pain in the arse of myself in the instrument making world until it all started to make some sense.

An important piece of advice came from David Armitage who, having seen some of my early instruments and made encouraging noises said "yeah these are OK But if you want to get really good you have to go away and make some more, LOTS more". I therefore started to make folk flutes in maple, a readily available wood at a low price and with not too much impact on the planet, I stained them in various bright colours and sold them as the "purple flute" available in other colours, for £55.00. They sold quite well, being a good bit better than the plastic drainpipe practice flutes then available and not much more expensive. This provided me with lots of practise and my customers with some serviceable instruments on which to make a start. One still occasionally comes across one in a session some 15 years down the line. I followed this mediocre success with descant recorders and whistles in high D and, lo and behold a new business was born. It only remained to run down the engineering business and keep improving my instruments- That was all!

We formulated a plan for the new business with a range of products aimed at the world of historical interpretation, adverts were placed for "Musket, Fife and Drum"and we made all three. Muskets were problematical as we needed a Firearms Maker's Certificate from the Police and had to install all the appropriate security measures in the building. We held the licence for three years after which it was obvious that our strength was in musical instruments and so we did not renew it but continued with "fife and drum".

It soon became apparent that any new engineering customers only came to us because they had run out of credit with the previous supplier, not a good bet. Cathie was encouraging me to make more instruments so it was decided to take on no new customers and to wait for the existing ones to fade into the background all the time concentrating on instrument development. In 1994 we got our first invitation to exhibit at the St. Chartier gathering in France. We sold out! Everything went, we took orders to bring home and it seemed that our future was secured. Within a year the engineering business had paid off all outstanding invoices, we had successfully collected all monies owed, sold the workshop unit and set up a new workshop at home. We had escaped by the skin of our teeth and heaved a huge sigh of relief. There was enough money left over for a new lathe and milling machine and along with a host of other equipment, I crammed them in to the garage and got on with the job.

In 2000 we sold the bungalow in Kent and bought a bigger place with a bigger workshop in Nottinghamshire paying off the mortgage with the change. As you will see from the rest of this web site the business continues, drums were discontiued in 2002 because demand for woodwinds meant that we had no time left to make percussion instruments. Boy were we glad to be shot of the transport problem! I have made in excess of 1500 instruments to date and continued to increase the range of instruments trying to add something new to the catalogue every year. Some years ago I stopped making the Bb fife due to lack of demand but, more, recently people have expressed an interest in them again. I have redesigned the instrument with a smaller tapered bore and tuning slide, the new instrument performing a good bit better than the early ones. By coincidence at about the same time, we received an invitation to a lunch party to celebrate Roger Davenport's (remember him?)60th. birthday As it was Roger who was my initial inspiration, we thought it would be appropriate to present the first of the new generation of Bb fifes to him on that occasion. I made the presentation with a much embellished version of this account the aim being maximum embarrassment for Roger and maximum laughter for his friends and family. The event was a great success and I regard it as a nice milestone to look back on as my instrument making career progresses. 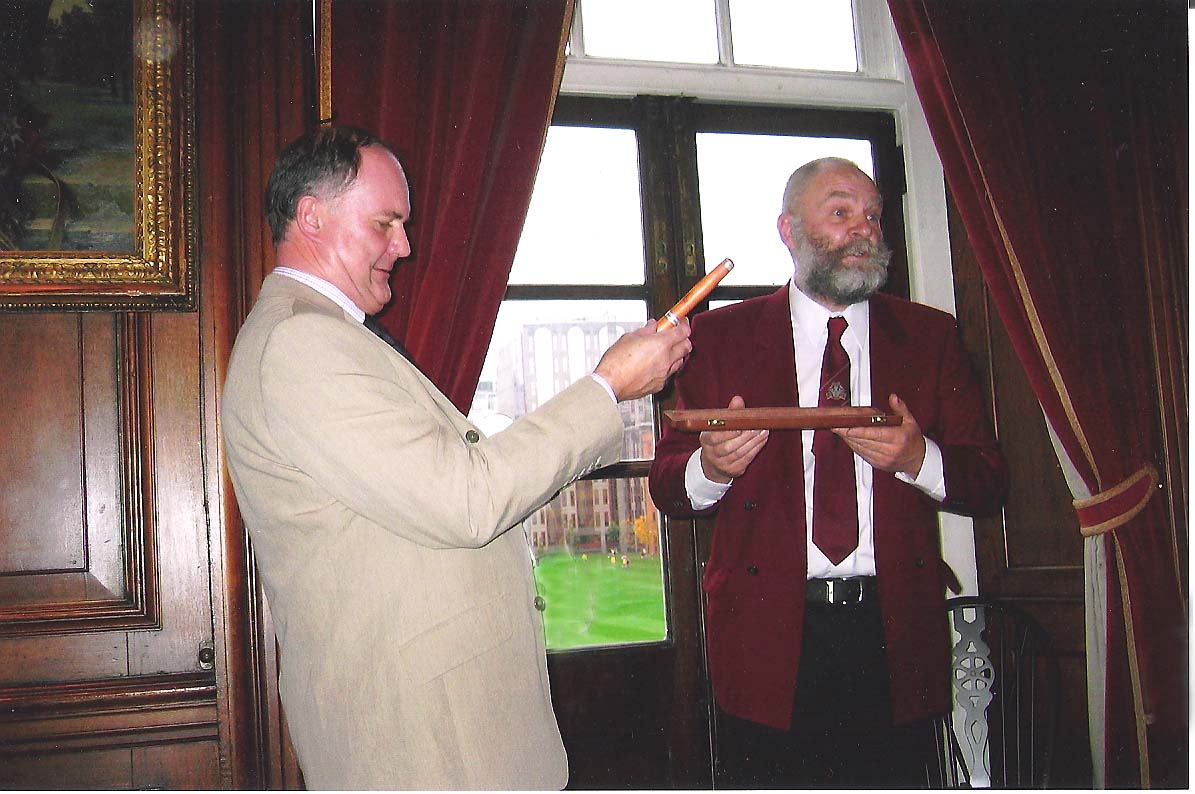 PHIL PRESENTING THE NEW Bb FIFE TO ROGER DAVENPORT
OF THE HONOURABLE ARTILLERY COMPANY
AT THEIR HEADQUARTERS IN LONDON
ON THE OCCASION OF HIS 60th. BIRTHDAY IN 2005

Finally I would like to take this opportunity to thank Roger Davenport, Dave Van Doorn, David Armitage, Matthew Dart and the hundreds of others, all over the world, who have contributed, sometimes unwittingly, to my re-education, it really is the best thing I have ever done.